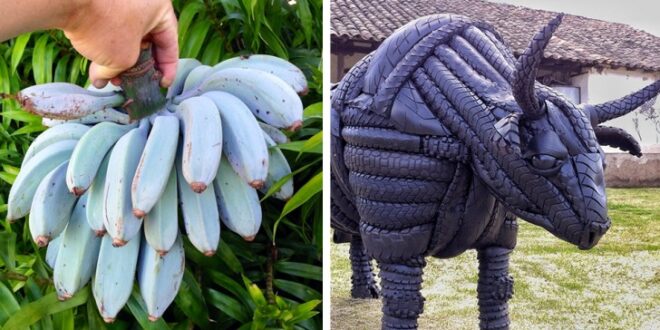 15 Images Show Rare And Fascinating Things Few People Have Had The Chance To See.

We are surrounded by extremely rare and fascinating things, and only a few are lucky enough to see them. But luckily, a lot of people have decided to share some of these things with us, making us part of these small and big wonders. Some are on the other side of the world, others are right in front of our eyes: it is enough to step out of the monotony and the ordinary and discover something that one would not expect to see. Some have immortalized the largest bust in the world, others a transparent fish, a fuchsia grasshopper, a two-tone sunflower, or blue bananas. Take a look at these photos and be amazed.

#1. The stone of this castle has slowly worn away for 700 years, the rain has been falling in the same place.

#2. A horse with curly hair and mane how many people have seen this peculiarity?

#3. It is the largest bust in the world it represents Shiva, is located in India, and measures 34 meters high.

#4. It looks like flames are about to come out of his eyes they are completely orange, with darker shadows.

#5. The sculpture of this bull was made entirely with recycled tires with old objects, we can build works of art.

#6. Studio Vural’s project for a house dug directly into the sand dunes and 100% sustainable: it can produce its own energy using solar and wind energy.

#7. An airplane, during its flight, passes through the clouds and leaves this mark behind.

#8. An Old Musical Typewriter This is how music was printed before the arrival of computers.

#9. This person had the chance to photograph a golden bee it landed directly on his car.

#10. A sunflower half yellow and half dark red. what is the reason for this color change?

#11. Blue bananas. it is said to have the same consistency as ice cream and a taste reminiscent of vanilla.

#12. A totally transparent fish. this person had the chance to observe it closely.

#13. This photo shows the game of chess in Russia in 1924. one entered directly on the chessboard.

#14. This ray of light formed quite naturally inside a rock.

#15. Someone found a purple grasshopper in their garden. have you ever seen one like this?

We have seen, in these photos, some of the wonders that nature, history, and the hand of man have given us. Have you ever seen similar things?

Previous PARENTS STILL LOSE SLEEP OVER GROWN CHILDREN
Next 16 Times Mother Nature Has Managed To Amaze Us With Scenes And Creatures That Are Nothing Short Of Spectacular.