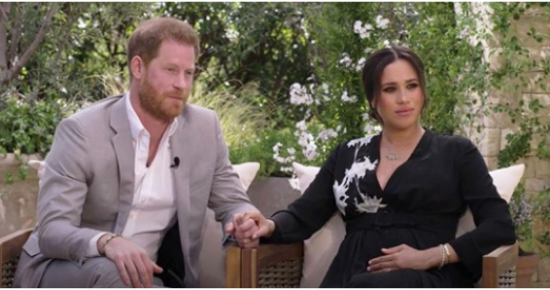 Meghan Markle has opened up to Oprah about how she was “haunted” by a photo of herself while pregnant with Archie, after seeing the ‘real truth behind it’.

Scroll down to find out the reason why…

This was the long-awaited moment….

However we weren’t expecting this. Meghan and Harry are still haunted despite packing up and moving away from the family.

Everyone was shocked by their revelations.

Below are some of the shocking details they spilled of what they had to endure during their short stay at the Palace.

Meghan admits she entered her marriage to Harry very “naively.”

Mentioning to Oprah how she failed to research before settling down with Harry.

“I didn’t grow up knowing much about the royal family,” she said.

A lot of people in the states romanticise about the idea of being a royal, as if it’s a fairytale. Although she didn’t expect it to take the dark turn that it did.

She also explained how she “never looked up [her] husband online.”

Markle revealed that she got married to Harry three days prior to the televised wedding so they could have a “moment” to themselves.

Meghan discussed curtsying Queen Elizabeth, when behind the scenes.

Meghan was first introduced when the pair were invited for lunch at the Royal Lodge, where Sarah Ferguson and Prince Andrew live.

“Right, do you know how to curtsy?” Harry said to Meghan once he discovered they would be meeting his grandmother.

Meghan admits she thought curtsying was just an official move.

It was Meghan who opened Harry’s eyes and made him realize he was “trapped.”

Oprah asked Harry would he have been able to step down from his royal duties without Meghan, which he answered no.

What he responded with was somewhat concerning…

“I wouldn’t have been able to, because I myself was trapped as well. I didn’t see a way out.”

Harry explained what it was like being part of the Royal family.

He also mentioned his “compassion” for his brother and father.

“They don’t get to leave. And I have huge compassion for that.”

In 2020 Harry was officially cut off financially .

Once they made the announcement to step back from their royal duties they have lived off the inheritance of Harry’s late mother.

“I’ve got all my mom left me. And without that, we would not have been able to do this. She saw it coming, and I certainly felt her presence throughout this whole process.“

Meghan explains how she was “silenced” by the royal family.

Prior to the full interview being aired, Meghan revealed in a clip how she was “silenced” by the Palace.

“I’ve always been outspoken, especially about women’s rights, and that’s the sad irony of the last 4 years, I’ve advocated for so long for women to use their voice.”

Her notion of being “protected” by the royal family fully fell apart following their marriage.

“That was hard to reconcile because it was only once we were married and everything started to really worsen that I came to understand that not only was I not being protected, but that they were willing to lie to protect other members of the family. They weren’t willing to tell the truth to protect me and my husband.“

Prior to the interview many reports mentioned how Meghan had made her sister-in-law, Kate Middleton cry but it appears to be the other way around.

When she saw it in the press she was “shocked”

To her it was the “beginning of a character assassination.”

Without going into too much detail about the incident, she mentioned they have made up.

“I don’t say that to be disparaging to anyone, because it was a really hard week of the wedding, and she was upset about something. But she owned it, and she apologized, and she brought me flowers and a note apologizing“, but she also admits the situation “made [her] cry” and “hurt her feelings.“

Meghan and Harry mentioned in the interview that there had been many conversations regarding his skin colour.

Meghan mentioned this to Oprah:

“In those months when I was pregnant, all around this same time, we have in tandem the conversation of he won’t be given security, he’s not going to be given a title, and also concerns and conversations about how dark his skin might be when he’s born.”

Some even wondered “what that would mean or look like” if their son had dark skin.

The couple wouldn’t name the people that made these comments because they “think that would be very damaging to them.“

“That conversation I’m never going to share,” Harry added once he joined the interview. “At the time, it was awkward. I was a bit shocked.”

Harry and Meghan have announced they are expecting a baby girl.

Although they haven’t revealed an official due date.

They also revealed that they don’t plan to have any more children.

Meghan opened up about her suicidal thoughts while pregnant with Archie.

Meghan revealed that she had “suicidal thoughts.”

“I was ashamed to say it at the time and ashamed to have to admit it to Harry. But I knew that if I didn’t say it – then I would do it.“

“I just didn’t want to be alive anymore, that was a clear and real and frightening and constant thought.” said Markle.

Meghan also spoke to another senior royal who mentioned she couldn’t seek help for mental health because of how it would look on the whole family.

Meghan still feels “haunted” when she sees that certain glamorous red carpet photograph of herself.

Despite looking looking content the actual reality of things was very different.

When she told Harry about her feelings and he “cradled her”, but they then had to get dressed up and go to the engagement.

Meghan wouldn’t normally look at photos, but her friend sent her a snap to tell her how great they looked.

She zoomed in on the photo and “saw the truth” as you can see how tight she is holding Harry’s hand.

Both were smiling and “doing their job” but in reality, they were “both just trying to hold on” she cried each time the lights dimmed.

Harry’s pain in his eyes is evident after learning how his wife felt.

Thankfully, Harry and Meghan in a much better place…

It appears their move to L.A has benefited them incredibly.