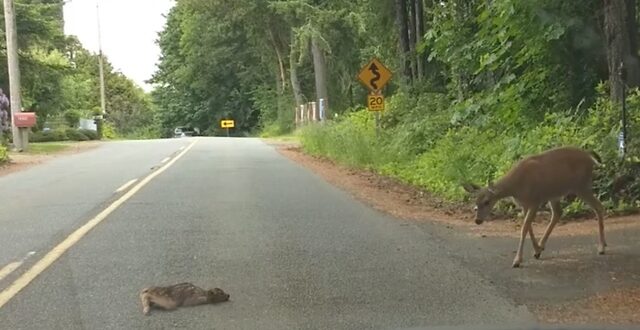 This is the adorable moment deer rescues her fawn, after the little thing got scared and stuck in the middle of a road. The caring mother deer eventually convinced her baby to move on and they both made their ways to the bushes. A driver witnessed the whole scene and even caught it on camera. Jessie Larson was driving on a highway in Port Orchard, Washington state, when came upon a tiny fawn. The cute little thing was lying on the road and it looked unable to move. Jessie initially thought it may got hurt and her intentions was to get out the car and help the poor animal. But seconds after, she spotted the fawn’s mother and she immediately pressed the record button. The mama deer carefully approached her little baby, who looked scared. Soon after the driver spotted the deer, she turned off the car’s engine so the deer wouldn’t be scared off. Then, the loving deer started to cuddle the confused fawn to boost its confidence. Shortly after, the little on got on its feet and the pair walked to the woods. “Most likely , the little guy got so scared, he just laid down on the road,” Jessie said. “I turned off my car to let them have a moment to calm down. After a few seconds, Mama came out and encouraged baby to get up and walk.”

Previous Dumb But Funny Things To Laugh At
Next Italian Zonkey Is Half Zebra, Half Donkey But Fully Adorable