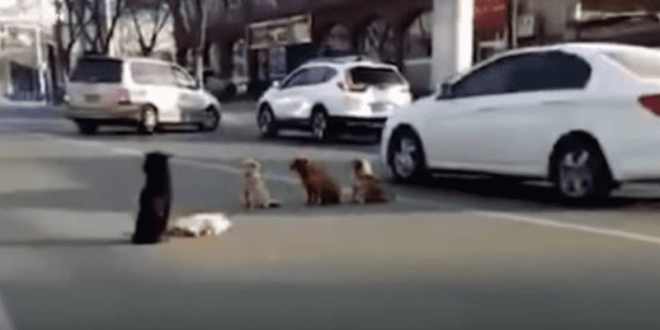 In Lanzhou, Central China, people beheld a heartwrenching sight as they saw a pack of street dogs surrounding their dog friend after it was hit by a car in the middle of the road.

The wise pack of dogs are only trying to protect their buddy from further injuries from the passing cars.

Their “leader” (so-to-speak) snuggles the dog, hoping to revive him.

Heartbreakingly, the dogs soon realize that their friend is dead.

Knowing the poor pup is longer with them, they bid their last goodbye by staying by his side a little bit longer.

According to Mirror, an eyewitness said that the dogs didn’t seem to know that their buddy had died, and they waited for the dog to get up again and start walking.

As strays, these dogs had cared for and bonded with one another as a pack.

Usually, these dogs spend a great idea of time together looking for food, shelter, protection, and companionship.

A homeless dog considers the pack as family, and to be one of them gives the stray dogs a better chance for survival, just like in the movie Oliver and Company.

One can only imagine just how attached and loyal these dogs are to one another.

They must have shared more than a few memories together, both happy and sad, as they lived on the streets.

We cannot deny that a special bond existed among them, because it’s painfully obvious in how they stand in solidarity with their friend, even after he’s crossed the rainbow bridge.

No wonder they grieve when they lose someone they care about. Dogs, like any other animal, have their own unique way of behaving when they experience loss.

Grief is not exclusive to us humans, and neither is loneliness.

“Dogs also grieve the loss of a companion, though we may not see it,” The Spruce states.

A dog’s physical response to grief could manifest itself as lethargy, loss of appetite, illness, and/or a change of personality. They could become restless, dominant, or aggressive.

Dogs are not the only ones who mourn the loss of one of their kind.

Sarah Simmons shares a post of a pony hit by a car on the forest road. In the photo, a group of ponies was standing by the side of the road, and intently looking over the dead horse on the other side of the road.

A heart-breaking sight to see for animal lovers.

From the looks of it, the ponies are upset and very sad. Animals, like dogs and ponies, are very sensitive creatures. They deeply care for their kind.

To keep their ponies from being hit on the forest road, their owner and other concerned citizens posted a sign that read:

“SLOWDOWN DAY/NIGHT ON FOREST ROADS THESE PONIES have more right to these roads than you do.”

They used the heartbreaking image to highlight the grief that negligent drivers can cause to humans and animals alike.

Some drivers are sympathetic and cooperative, but some drivers still drive recklessly, posing a danger for ponies and other wildlife crossing the forest road.

Both the video clip of the dog protecting their deceased friend and the post by Sarah Simmons about the herd of ponies grieving for their friend have gone viral.

You can watch the moving video below.

Previous 10+ Reasons Why Women Always Feel So Bloated & How To Reduce.
Next Heart-Melting Moment Dad Lion Crouches Down To Meet His Baby Cub For The First Time