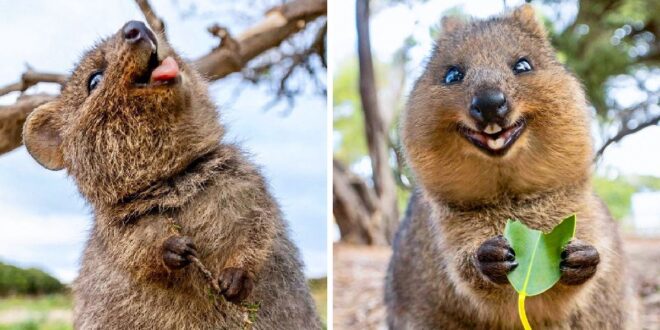 It is common to see photos of smiling animals from time to time, but with Quokkas (a.k.a the happiest animals), every picture you see of them is guaranteed to make you smile!

Quokkas are in the same family as wallabies and kangaroos.

They are small four-legged animals covered in fur and have pouches in their abdomens for carrying their young – similar to a Kangaroo.

Even though they are from the same family as the kangaroo, the quokka is around a domestic cat’s size.

Quokkas have narrow faces, round ears, big noses, and tiny paws. The combination of these makes them an absolute cutie to look at from every angle.

The quokkas are known as the most cheerful animals in the world due to the happy expression on their face.

Their expressions range from a tiny smile to a toothy grin.

With that face, it is obvious that quokkas are friendly and approachable creatures.

Due to their expression, tourists are often fond of them, and due to that, they are used to people and have little fear of human contact.

They will often hop right up to passers-by who are marvelling at them – as well as posing for a selfie with them!

However, they can also be mean sometimes despite their friendliness. Since they are used to human contact, they are not afraid to bite us when they feel threatened.

Quokkas also have powerful hind legs that they use for kicking and hopping.

Quokkas also love photographs, but they do not like to be handled.

Trying to pick them up or pet them may result in injury and fines by the Australian Government.

One study found that their favourite food is Pink Paper Bells – a white-purple flower native to Western Australia.

The first time they put something to their lips, they swallow it whole and then regurgitate the food and eat it – allowing them to extract extra nutrition.

As for their habitat, Quokkas live in trees, shrubs, swamps, and other areas with dense vegetation.

They severely dislike open spaces and prefer environments where they can hide from potential predators.

Quokkas are known for their rapid reproduction rates as well. These animals mature quickly, and they can give birth twice per year.

With its 10 years of lifespan, a Quokka can produce between 15 to 17 babies in their lifetime.

Another fascinating thing about these creatures is that they can do something called Embryonic Diapause – which means delayed impregnation.

This is when a female can mate with a male but delay her egg development until conditions become favourable for raising a baby.

Their natural predators are birds of preys as well as dingoes.

When faced with a predator, their first instinct is to run away.

Their natural reaction is to hop at high speeds, dive into burrows or scurry up branches to hide.

If cornered, quokkas will bite with their teeth and scratch with their claws or use their powerful hind legs to kick.

And finally, before you ask, you cannot keep Quokkas as pets!

Previous These People Asked To Be Roasted And Regretted It Immediately
Next RARE White Killer Whale – One Of Five In The World – Spotted Near Alaska.