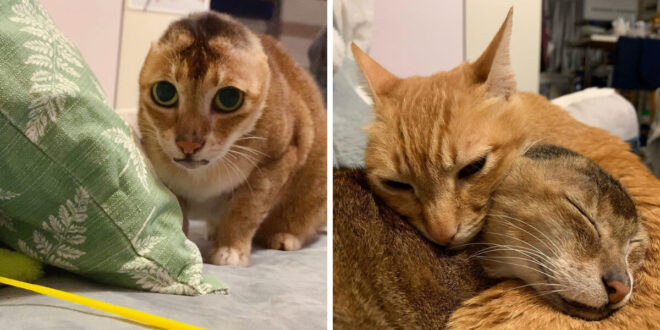 Animals are in total danger whenever they are out in the open, let alone on the streets. Being homeless puts them at a lot of health risks as well, they starve out there, they get injured, they get preyed on larger animals.

They may end up getting hit by passing vehicles, incurring injuries, and worse, it may even cost them their lives. If not, they may also end up being captured by people who can illegally sell them on the black market.

Luckily, there are still people who are out there, ready to give these homeless animals their forever homes. This beautiful story will surely pull at your heartstrings.

The world becomes tenfold scarier, especially when you look different, however, this kitty has luck on his side.

He is surrounded by a set of loving people and another animal who is ready to shower him with the kind of love that he’s never had before.

This dapper boy is fittingly named Potato, and he lives in China with his owners and his best friend and cat brother, Horlick. He was rescued from the streets of China two years ago, but the poor little thing was very unwell.

Potato had ceruminous adenoma in his ear canals and on his ear flaps.

The veterinarians were able to treat it but, unfortunately, this rare tumor was recurring. They have decided to perform minor surgery on him to save him from further complications.

They removed Potato’s ear canals and flaps, this way, the disease will no longer come back.

He may have lost his ears but it gave this brave feline gained a brand new start, another shot at a healthier life. Potato was adopted around the time of his surgery, so he was lucky enough to be supported by his very own loving family as he recovered from his op.

In fact, Potato’s owners made him his very own Instagram account, which has already gained over 8,000 followers! People just can’t get enough of Potato’s cuteness. They shared this adorable pic with the caption ‘recovering well!’ Just look at that little round head.

Better still, Potato has now made a best friend — his brother Horlick. The two can be seen snuggled up together on Potato’s Instagram account and it’s truly adorable!

Horlick is a protective type of brother, Potato is indeed lucky to have him as a brother.

These brothers will always sleep right next to each other. They both find comfort and ease when they are together, nobody or nothing can break their bond.

This adorable picture was captioned, ‘Potato is so clingy that he always sticks with Horlick to sleep.’ Don’t they make such a sweet little pair?

In this picture, Horlick puts his head lovingly on top of Potato’s as the pair drift off to sleep together. One comment said, ‘This is so freaking sweet!!’, and we can’t help but agree!

Another user said, ‘I wish my cats got along like this.’ The pair really do have a special bond.

Amazingly, Potato’s owners said on Instagram that the dapper boy still has his hearing! Though they are unsure of his age, writing:

“Potato was a stray cat, so no one knows when he was born or how old he is.”

They have estimated that this little guy is around six years old, but instead of celebrating his birthday, his owners choose to celebrate the day they adopted him. As he was adopted on April 25, 2019, he has now just celebrated his first ‘birthday!’

This beautiful and inspiring story simply proves that nothing is impossible, even for animals. In Potato’s case, he didn’t only escape the dangers of his life-threatening disease but also found his forever home and family.