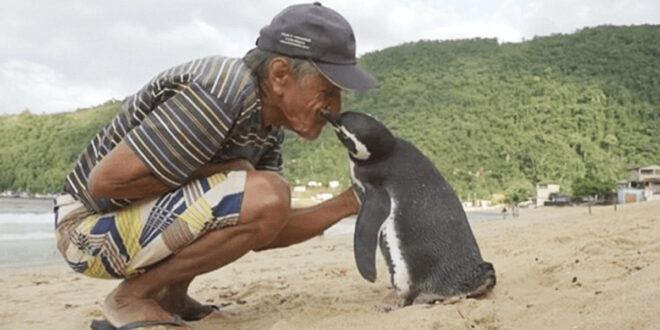 Penguin Swims 8,000KM Every Year To Visit The Man Who Saved His Life

It’s illegal for you to keep wild animals as pets in Brazil. But despite what the law may say, Dindim comes to live with his best friend, whom he met on the beaches of Brazil, every year since 2011.

71-year-old retired bricklayer and part-time fisherman Joao Pereira de Souza found Dindim, a South American Magellanic penguin, covered in oil and close to death. When De Souza nursed him back to health, however, he found that Dindim didn’t want to leave; when he finally did, De Souza was surprised to see him return the next year, and the years following.

“I love the penguin like it’s my own child and I believe the penguin loves me,” Joao told Globo TV. “No one else is allowed to touch him. He pecks them if they do. He lays on my lap, lets me give him showers, allows me to feed him sardines and to pick him up.” (h/t: independent) “He stayed with me for 11 months and then…he disappeared

Meet the Penguin Colony that Hangs Out on Beaches in Africa

This story is enough to warm the iciest of hearts. Please share this touching story with your friends and family!