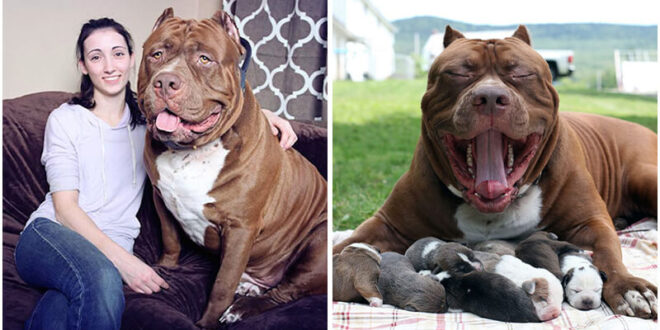 Pit Bull is often described as the scariest dog on Earth, but actually, they could be just as sweet as a little girl if you’re nice enough and guide and train them well. Don’t let the breed fool you.

Meet Hulk, a gentle giant who could melt your heart in the warmest way possible. The huge boi weighed 173 lbs in 2015 when he was only 17 months old and was recorded as the biggest Pit Bull in the world.

Even though his appearance can scare people out of their wits, Hulk is actually a love bug who really enjoys long cuddle sessions with his human friends. Of course Hulk is trained impressively well too, since his owners Marlon and Lisa Grannon run one of the best in the business for breeding and training guard dogs and police dogs in the USA – the Dark Dynasty K9s.

Both Marlon and Lisa love Hulk a lot. No matter how many dogs come and go, Hulk will always stay. He’s an irreplaceable part of their life. Marlon even revealed that some people offered a few hundred thousand dollars to take the cheerful boi away, but Marlon turned them all down.

Dogs trained by Marlon and Lisa are often calm and obedient, and Hulk is no exception. In fact, he is so tender that the couple even trusts him totally with their kids.

Now the three are so close that they could even form a band together, listen to that vocal:

Hulk also is a proud father with his own children, and he does a great job raising and having fun with them!

Isn’t Hulk fantastic? Please share his story with your loved ones!

Previous Trapped In Poacher’s Snare For 4 Days, Rare Baby Albino Elephant Was Rescued And Made An Incredibly Recovery
Next Cute Girl Sings Her Beloved Puppy To Sleep With Sweet Lullaby