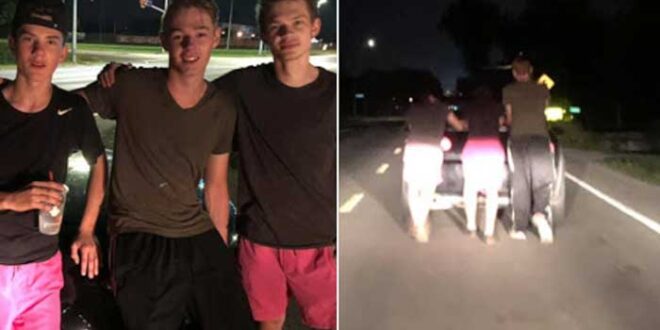 As a woman was driving her Chevy Cobalt through Ontario, Canada, on a lonely highway around 1 in the morning, it broke down.

Three teenage boys were on their way to grab something to eat after a late-night swim and spotted the smoking car and its distressed driver. So they pulled over, still in their swimsuits, and attempted to fix what was wrong with the woman’s car.

All three of their dads had taught them how to fix cars, but this one was done for, they quickly realized. She told them she couldn’t afford to have her car towed. So the boys – Aeron McQuillin, 18, Bailey Campbell, 17, and Billy Tarbett, 15 – then decided to push the woman’s car all the way to her home, which was just over 4 miles away.

So the woman steered as the boys pushed for more than 3 hours. At some point during the push, another motorist, Dan Morrison of Niagara Falls, could see what was going on. So he slowed down behind them to give them light, keeping his flashers on for other motorists to see. He was amazed by the boys’ kindness to do that for the woman.

Says Dan: “I’d never met these kids in my life. Dad mode went into effect and I just wanted to make sure these kids were safe.”

So would they do it again? You bet they would.

Says Billy, the youngest of the boys who pushed the car: “We were always raised to help, no matter what the situation was… We were helping her but also she was helping us, doing a workout.”

Dan posted about the boys rescuing the woman on social media, and it quickly went viral.

We are sure you enjoyed the above story… watch for more:

Previous This Lady Patted And Rocked Isaiah To Sleep Like She Had Given Birth To Him.
Next Trending Collection Of Funny Memes And Pics To Entertain Your Brain