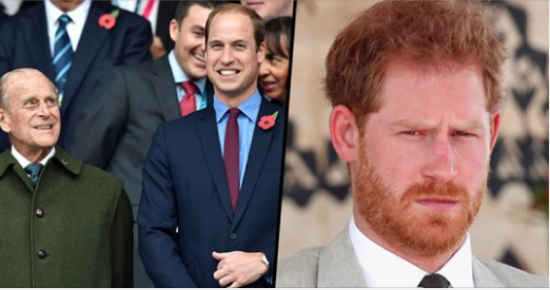 However, despite his statement being moving, many people feel it was also a swipe of Harry.

Scroll down to hear what William had to say in his statement.

Now, it was announced on the morning of April 9th that Prince Philip, the Duke of Edinburgh, had passed away.

He had been struggling with his health issues for some time…

Philip had many surgeries over the years.

Days before turning ninety two he dealt with complications such as a blocked coronary artery and a bladder infection.

Which resulted in the Duke requiring exploratory abdominal surgery.

In 2015 after being the longest-standing royal consort in British history he decided to retire from public engagements.

Shortly after, he had another health issue which involved hip replacement surgery.

He has been on a rocky road since then.

However, things truly took a turn for the worst for the royal this year.

Prince Philip was rushed to hospital after feeling “unwell” on 16th February.

It was reported that he would be spend “a few days” there.

After being taken to the King Edward VII Hospital in London he seemed to be in good spirits.

The Duke did make a brief recovery…

Things started to get worse.

On 9th April Buckingham Palace announced that Prince Phillip had tragically passed away at the age of ninety-nine.

Phillip will be greatly missed by all.

Tributes from fans, celebrities, and politicians poured in following the news.

“It is with deep sorrow that Her Majesty The Queen has announced the death of her beloved husband, His Royal Highness The Prince Philip, Duke of Edinburgh. His Royal Highness passed away peacefully this morning at Windsor Castle. The Royal Family join with people around the world in mourning his loss. Further announcements will be made in due course.”

Everyone has been focusing on one member of the family in particular.

Prince Harry currently resides in California with his wife, Meghan Markle, and their son, Archie.

Harry returned to the U.K directly after the news of Prince Phillip’s death.

He arrived in Heathrow on a British Airways flight at around 1.15 pm on Sunday. He was reportedly met by security off the plane before being driven away in a black Range Rover.

Meghan didn’t join him due to medical reasons in her third trimester.

All eyes are focused on the future King of England.

Read his statement below:

“My grandfather’s century of life was defined by service – to his country and Commonwealth, to his wife and Queen, and to our family.”

William shared a beautiful image of his son and Prince Philip and wrote:

“I feel lucky to have not just had his example to guide me, but his enduring presence well into my own adult life – both through good times and the hardest days. I will always be grateful that my wife had so many years to get to know my grandfather and for the kindness he showed her.”

“I will never take for granted the special memories my children will always have of their great-grandpa coming to collect them in his carriage and seeing for themselves his infectious sense of adventure as well as his mischievous sense of humor!“

“My grandfather was an extraordinary man and part of an extraordinary generation. Catherine and I will continue to do what he would have wanted and will support The Queen in the years ahead. I will miss my Grandpa, but I know he would want us to get on with the job.”

Previous Huge Alaskan Dog Suffered From Depression And Was Saved By Little Kittens After Her Feline Best Friend Passed Away
Next If You Can Find The Woman Hiding In This Photo, You’re Considered To Have An Above Average IQ