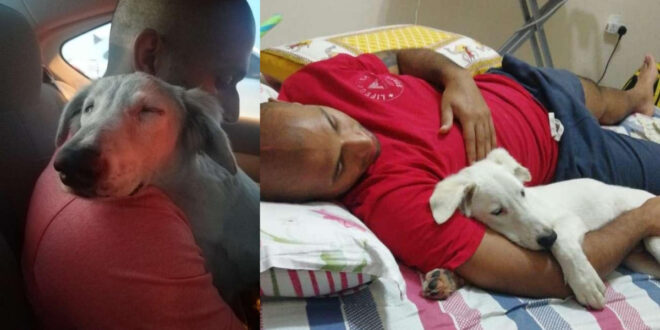 It was a hot day in Dubai when Anand Raman decided to visit his sister at her work. It seemed like everyone he passed was trying to stay cool — including one dirty young dog seeking shade beneath a parked car at his sister’s office.

“He was under a car eating scraps some of her workers had left for him,” Raman told The Dodo. “His fur was matted and his legs weren’t quite right.”

Despite all this, when the dog saw Raman, he came running like some long-lost friend. Raman wasn’t planning on saving a life that day, but one look at the happy pup and he knew he had no choice.

“He approached me with a curious but excited disposition, wagging his tail excitedly,” he said. “This demeanour of his is what initially made me fall in love with him.”

“We then sat there for a while on the sidewalk and he was content just receiving pets from me for a while,” Raman said. “I carried him into the car and he immediately fell asleep on my shoulder.”

Anand Raman saves a young dog off the streets of Dubai 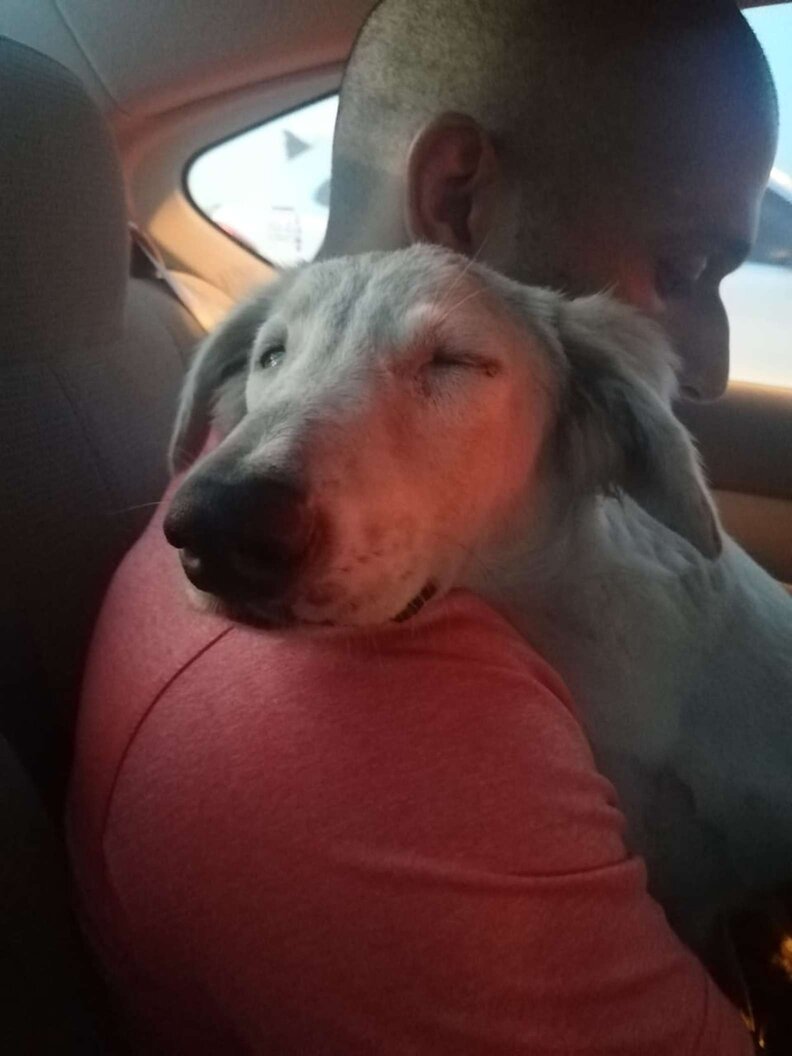 Anand Raman
With the help of his sister and brother-in-law, Raman was able to drive the dog directly to the vet. “He was exhausted when I first got him, which is why he fell asleep right away in the car ride to the hospital,” Raman said. At the clinic, Raman learned the reason behind the dog’s wobbly gait: He had rickets in both of his front legs due to malnutrition. Thankfully, the condition is treatable and will not have lasting effects.Finally home, Raman gave the dog a bath and was shocked by what it revealed: “I was surprised to find out that his fur was actually pure white after all the dirt and grime came off his body.”

Snowy the street dog adjusts to his new home 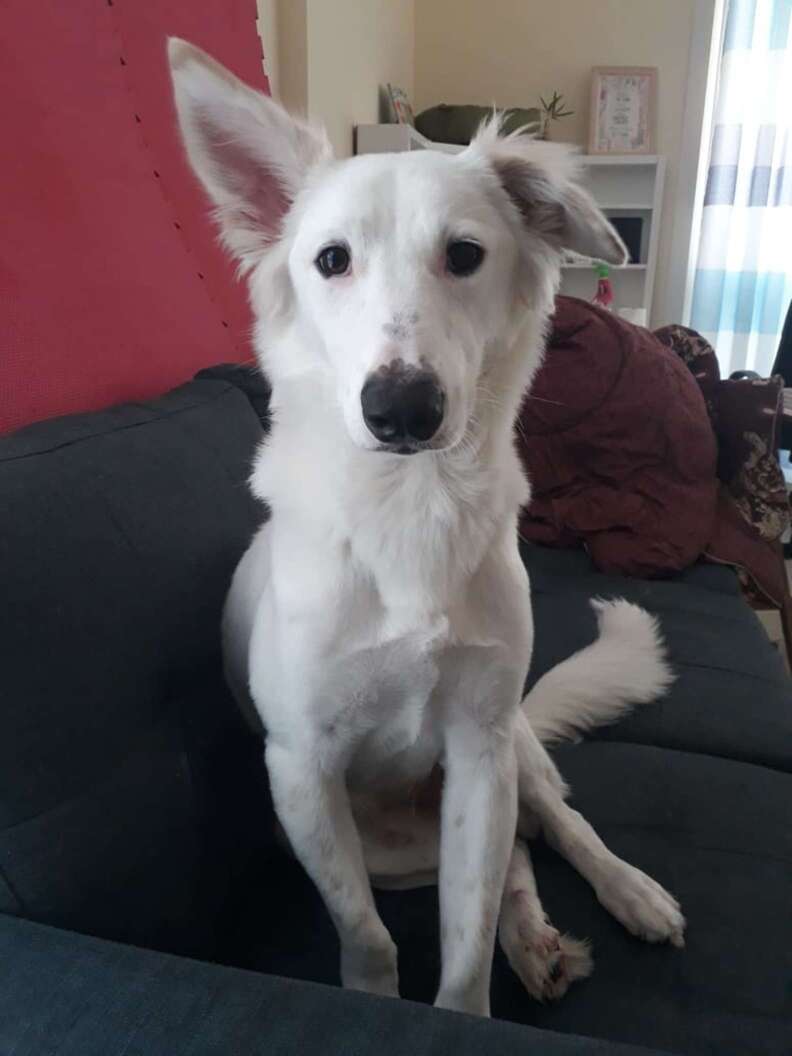 Anand Raman
Raman dubbed the dog Snowy, after his fur — and the faithful dog from the comic “The Adventures of Tintin.”

Snowy the rescued street dog cuddles with his dad

Anand Raman
But teaching the young dog who spent his entire life surviving on the streets that he was finally safe was harder than Raman anticipated. “Getting him adapted to a house at first wasn’t easy,” Raman said. “He wasn’t sure where to go and what to explore, so he’d just sit in a corner.”

“When I would take him for walks, he was constantly terrified that I was going to leave him back on the streets, so he would yank his leash away from me and run back into the parking lot of our building complex,” Raman added. “This happened for a while until he realized we were not going to let him go anywhere fast.” 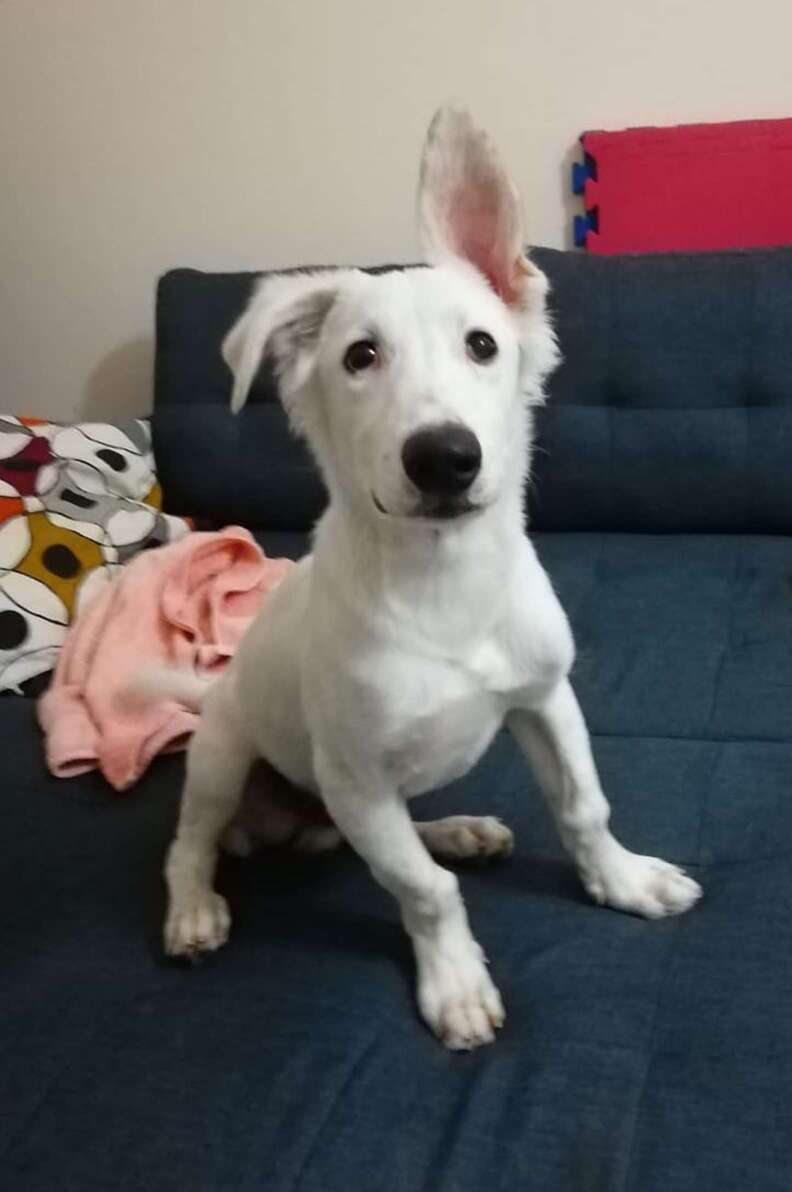 Anand Raman
Two months later, Snowy finally understands that he is wanted and loved. “He sleeps and waits for us to get home from work, which is when he showers us with love and we reciprocate the same with him,” Raman said. “He also gels amazingly well with any dog he comes across and is very well-behaved with kids and guests.” Snowy has kept one thing from his past, however. He still loves hugs from his dad — even when he’s not sleepy.

Previous These Two Stray Puppies Were Just Rescued, And They Refuse To Stop Hugging Each Other
Next The Public Had To Say The Same Thing About Prince Harry and Williams Despite The Funeral of Prince Philip.