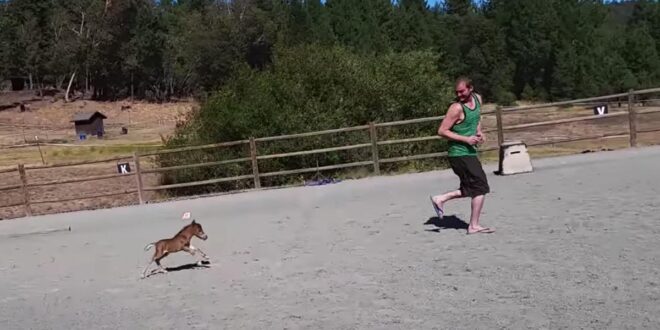 As it chases a fully grown man around its enclosure, a newborn miniature horse gives him a run for his money.

Many people mix up miniature horses and ponies, but they are not the same thing. According to Horse Illustrated, while ponies have “shorter legs, broader barrels, and a thicker body,” a miniature horse is “bred to be more sophisticated than the pony, with a long, versatile neck, straight legs, and a short back.” Miniature horses are a common breed because they are so adorable.

A video of a 3-day-old miniature horse playfully chasing one of its breeders, a fully grown man called Sterling, around its pen went viral recently, capturing the attention of the public.

Given that this miniature horse was born three days prior to the recording of this video, it’s amazing to see how much it gallops and how much it enjoys chasing Sterling. However, it appears that the young foal is more interested in capturing her breeder than in simply pursuing him. As Sterling waits for the adorable miniature horse to catch up to him, it rubs against him joyfully, hoping to be cuddled by her human companion. While the 3-day-old horse and Sterling are romping about, Grace, the foal’s mother, keeps a close eye on them. Despite this, she seems unconcerned about her youngster, instead contently watching it chase their breeder. She seems to be certain that Sterling will never hurt the foal.

Previous Donald Trump Called A ‘Disgrace’ For What He Did On Melania’s Birthday.
Next Baby Elephant Adorably Looks For Girls ‘Trunk’