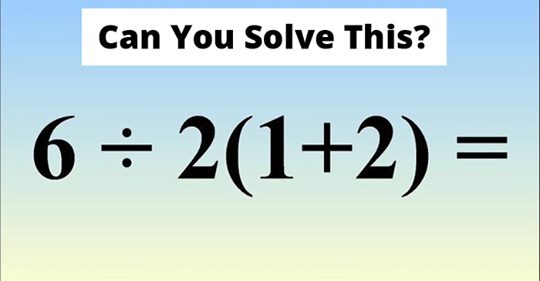 Twitter Disagrees On How To Solve This Simple-Looking Illusive Equation

Math is fun… not! Well, at least people who learned the value of naptime during math classes would agree. But when it comes to seemingly ‘simple’ arithmetic problems, you can still participate in this even if you hated math.

Now, try to solve this: don’t worry because you most probably won’t come to a wrong answer!

Truth to be told, this problem has been brought up a few times. It’s a problem that seems to circulate every few months and would end up in fervent discussions between people interested in the one true answer.Because that’s just how math is, it’s the one subject that always has only one absolute answer.

Now, what was the answer you came up with?

People arrived at different answers, with most people debating either 1 or 9 and the occasional 7. The answers were majorly split between people who solved it with PEMDAS, BODMAS or multiplying 2 with the numbers inside the brackets separately.

Alternatively, someone shifted the focus to the ÷.

Another wrote up the different ways people can arrive to the answer.

However, if you think of the ÷ symbol from 6÷2(1+2), it would be more accurate to solve it with the first method below.

As it currently stands, the equation that has gone viral a few times was purposely made ambiguous. Hence, there were multiple ways to interpret and solve it, albeit some might be more convenient than others. Mathematicians suggest that more clarification are added when a question has multiple interpretations to narrow down the meaning.

In the case of answering 1, this means you solved the multiplication first before dividing it. One user quoted the rule, “Order of operations tells you to perform multiplication and division first, working from left to right, before doing addition and subtraction.”

Then he asked, “Why do the multiplication first?”

The reply that Matt Parker quoted explained, “That’s because the second object is a “term” and “terms” are evaluated together.”

He further explained, “I think the reason many people (who write equations regularly) get 1 is that the convention of ‘adjacent means multiply’ outranks “×”. Just like a fraction outranks ÷.”

“In short: the matter of the space and are a kind of ‘soft brackets’.”
ShareTweet
Share