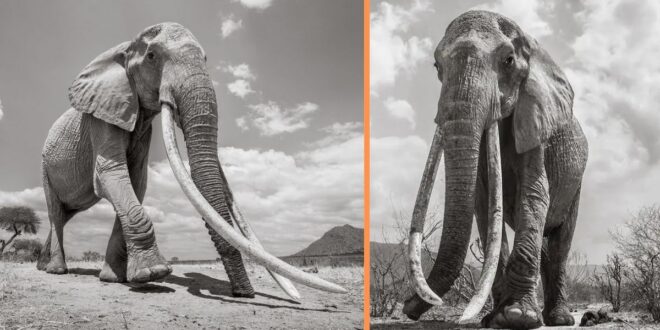 Photographer Captures Final Photos Of The ‘Queen Of Elephants’ (14 Pics)

Burrard-Lucas was already embarking on a project with the Tsavo trust photographing elephants in the area of Tsavo.

While he was studying the area, he learnt about F_MU1 AKA the Queen of Elephants. He was told she has a gentle temperament and is a very majestic creature.

After a search lasting several days, they finally found her, here is how he recalls it:

“Over the bushes I caught a glimpse of an elephant’s back and seconds later she stepped out into the open. I was speechless. F_MU1 was skinny and old but she strode forward with stately grace. Her tusks were so long that they scraped the ground in front of her. She was like a relic from a bygone era.”

They spent the whole day with her, she led them to her local watering hole where she patiently waited her turn to bathe.

Every picture captured the queen’s true majesty, every wrinkle representing a victory of time against the dangers of poaching, droughts and other natural threats, she made it this far.

Unfortunately, she passed away just weeks after Burrard-Lucas captured these photos, most likely due to natural causes. Thankfully, these photos immortalize her.

She has made the cover for Burrard Lucas’s book, Land of Giants, which covers several years of elephant living in the region of Tvaso.

Her long and prosperous life is certainly a testament to the hard work that the Tsavo Trust and the Kenyan Wildlife Services put in to protect these glorious animals.

Burrard Lucas recalls the experience, “as a wildlife photographer, a subject like F_MU1 is incredibly rare; a creature that is unique–possibly the most remarkable of her kind–and yet an animal that few have photographed before. The time I spent with her was a real privilege.”

You can read even more about his experience with this African elephant on his blog.

The final result is Land of Giants, a book filled with photos of the big tusk elephants living in Tsavo.

Previous Cringe Worthy Pictures Of People Doing Things They Will Regret Forever.
Next 30 Designs That Prove Some Designers Need to Take A Break