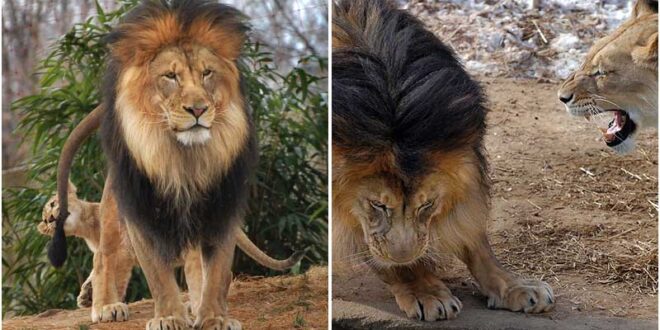 Lioness Scolds Male Lion As He Plays Fighting With His Daughter

The relationship between dads and daughters is one of the most beautiful things in this world. Daughters love spending time playing, eating, and sleeping with their dads. They even play fighting with their dad. It’s ok if dads let their girls play that game alone. But when they join it, things totally change. Mom will immediately run out from somewhere and “scold” poor dads. They even don’t realize what’s wrong with them. This familiar scene also happens with animals, guys. It is even seen in a lion family. The male lion that is known as the king of the jungle for its majestic mane and terrifying roar is scolded by his mate. These precious moments are snapped on camera by an amateur photographer named Jennifer Lockridge.

The majestic animal was actually playing with his kids. He tried to be patient, tolerant, and friendly with them. However, his playful daughter seemed to challenge his limit.

The female lion cub kept nipping at his tail. At first, he pretended not to realize and ignored her trick. But the dad lion failed in the end. His daughter’s game annoyed him and got him irritated. The lion dad decided to do something to show his little girl who was the boss.

He pinned his daughter to the ground in mock anger and played fighting with her.

Unluckily, the lion mom spotted that and intervened immediately. She scolded her mate while baring her teeth. She wanted to let him know she wasn’t happy with the way he got along with his daughter. “The particular cub, Lusaka, is particularly feisty and is always one of the last ones to go inside when called. Lusaka is definitely a “daddy’s girl” and seems to be the most enamoured with her father,’ says the photographer. “I don’t believe he realised she was biting his tail and he didn’t seem to be very upset. Lusaka has a habit of biting the tails of her siblings as well as the adults,” he added.