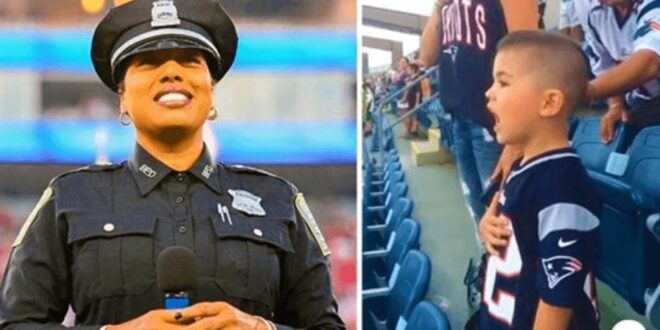 Usually, it’s the performer singing the national anthem at the beginning of a game who steals the show. He/she is typically chosen for his/her extraordinary voice and confidence. It’s not uncommon for the singer to be a celebrity or have some kind of Internet sensation status that got him/her on stage.

But, today, we have something a little different. At a football game between the Philadelphia Eagles and New England Patriots, Garrett Spence stands tall and strong and steals the show on the sidelines of the game that’s about to begin.

Boston police officer Kim Tavares was specifically chosen to sing “Star Spangled Banner” after a video of her belting out “God Bless America” with her partner, Officer Stephen McNulty, went viral. It was their “cop-pool” karaoke duet that hit the Internet and picked up speed fast, because, well, she has a darn good voice! Kim’s video sparked public intrigue and scored her that coveted spot on the field with all eyes on her holding the mic.

But, while Kim was delivering an extraordinary performance, a little star was born on the side! At only three years old, wearing a mini-sized Patriots jersey and his heart on his sleeve, Garrett proudly placed his hand over his chest and sang the anthem alongside Kim and his family.

Correction, Garrett wholeheartedly ripped into the anthem from the depths of his heart and soul and made sure everyone, including the man upstairs, could hear the love, passion, and pride put forth through his voice to show how much he cares about his country. Around him, he’s got a few adoring fans! Like the man reaching over trying his hardest to capture the moment on his camera, careful to cheer on the boy without disrupting him.

Garrett is just doing his thing, unaware that he’s doing anything special or out of the ordinary. The boy trips up a little bit, pausing at the parts he doesn’t know, but it just adds to the authenticity of his performance and paints a picture of his character! He’s one adorable little boy who’s got a lot of love in his heart. And he’s got two parents very proud of his patriotism and how their little boy’s singing has gone viral. While I’m not sure if he’ll be chosen next to sing at the opening of the game, I can say that nothing is impossible!

Click the video below to watch Garett sing like nobody’s watching when, really, we all are, and it’s just too cute.